Description: EA SPORTS 2010 FIFA World Cup South Africa will feature all the emotion and passion of the fiercest national rivalries battling on the world’s biggest stage, with all 199 national teams that took part in qualification, all 10 official licensed stadiums to be used in South Africa and stadiums from each qualifying region. Gamers will be able to play as their home nation from qualification right through to a virtual reproduction of the FIFA World Cup Final and feel what it is like to score the goal that lifts a nation. Everything fans love about the World Cup will come to life in spectacular detail, including confetti rain, streamers, & fireworksâ€”just like the official tournament.

Game Name: 2010 FIFA World Cup South Africa
Region: EUR
Media: UMD
Publisher: Electronic Arts
Genre: Sports: Traditional: Soccer
Language(s): English – Dutch
Game Description:
Experience all the emotion and passion of the world’s fiercest national rivalries as you live the dream of competing for the 2010 FIFA World Cup South Africa. Take on the challenge of leading your home nation from qualification right through to a virtual re-creation of the final with all the pageantry, drama and excitement of the official tournament. Spectacularly presented in true-to-life detail, EA SPORTS 2010 FIFA World Cup South Africa features all 199 national teams that took part in qualification and all 10 official licensed stadia to be showcased in South Africa.
The 2010 FIFA World Cup puts the journey from qualification to the final tournament in your hands on PSP. Customize the strategy and tactics of each national team to mirror the way they play — or the way you want them to play — in real life.
For the first time on PSP, create yourself in-game, wear the shirt of your national team and step onto the pitch in Captain Your Country. Compete with your virtual pro in Friendlies and Qualifiers to win your place in the full team, earn the captaincy, and then lead your nation in South Africa. Experience the thrill of scoring the winning goal in the FIFA World Cup Final and become a national hero.
A new shooting mechanic provides players with the ability to become a dangerous dead ball striker. Now you have total control over the spin on the ball for pin-point accuracy during corners and free kicks. Plus, dominate your opponent, build momentum and earn power boosts that will propel your squad to victory and the 2010 FIFA World Cup championship. 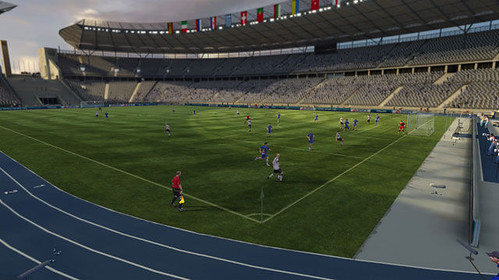 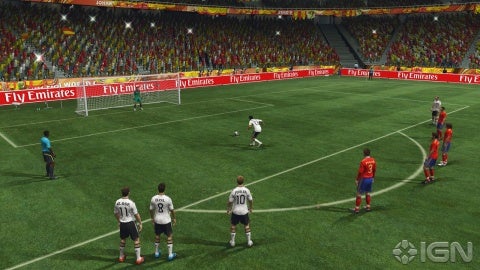